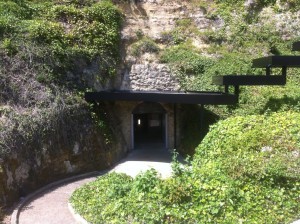 I recently returned from a trip to Normandy including Omaha Beach and Caen, France. Our end grain Iroko block flooring was chosen for a WWII Nazi Bunker project, and I was requested to assist with the installation. The CAEN Museum (normandy.memorial-caen.com), established in 1988 is regarded as the best World War II museum in France. The site of the museum was chosen because below the ground is a 3,000 sq. ft. Nazi bunker built for General Richter, from which the Nazis ran their war effort in Normandy against the allied forces of the USA, Canada, and Great Britain. The bunker is an eerie place, a long narrow tunnel style concrete bunker, left as it was built for almost  70 years. French officials decided it was time to open it to the general public as part of the museum, but some minimal restoration was needed. The concrete floor was apparently not suitable for public access, so it was first resurfaced. It was then determined that the concrete slab should be covered with a suitable floor to enhance the bunker’s appearance but without making a significant upgrade.  Considering the humidity is at or near 80% 24 hours per day, their choices were undoubtedly limited. They found end grain to be a suitable choice for durability and appearance, but would also need rot resistance and stability. They chose Kaswell Iroko End Grain, an African Teak, very stable and rot resistant, neutral in color, mostly tan and brown pieces.
While in Normandy, I also visited Omaha Beach, about 10 miles north of CAEN. I walked through the American cemetery that we all saw in Saving Private Ryan, which is also clearly visable on the Google satellite. My father, Harold, had landed at Omaha Beach 7 days after D-day, and needless to say, it was a very sensitive and meaningful trip. My father got into the block flooring business just 2 years after returning from the war.